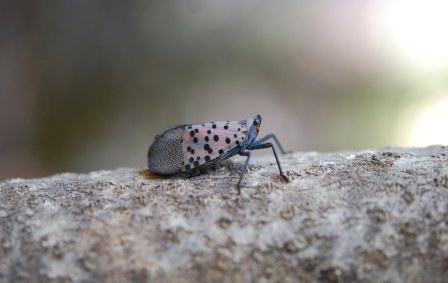 The Virginia Department of Agriculture and Consumer Services (VDACS) just announced the detection of a new invasive insect pest in Virginia. In early January, VDACS inspectors discovered the Spotted Lanternfly (SLF), Lycorma delicatula, at a stone yard in Frederick County near Winchester. The Spotted Lanternfly is native to China, India and Vietnam, and prior to the January detection, was not known to occur in Virginia. Both SLF egg masses and dead adults were detected at the Winchester site.

Spotted Lanternfly feeds on more than 70 plants, including grapes, stone fruits, hops and ailanthus (Tree of Heaven). The insect causes damage to plants because of its method of feeding, the rapid buildup of large populations and the production of honeydew, a by-product of their feeding activity that serves as a medium for fungal growth. SLF can also be a nuisance pest to homeowners when found in large numbers.

The first U.S. detection of SLF occurred in 2014 at a Pennsylvania business that imports stone products. Stone products from that business went to the Winchester site. VDACS inspectors had been monitoring the Winchester site since 2015, with no positive detections until a routine follow up survey in January. Inspectors then found SLF on ailanthus trees located on the property.

Early detection is vital for the management of any newly introduced plant pest. VDACS is now conducting a survey in the surrounding area in an effort to determine the extent of the infestation. VDACS is also working with Virginia Cooperative Extension and the Pennsylvania Department of Agriculture to determine management and control strategies for SLF.

For more information on Spotted Lanternfly in Virginia, see vdacs.virginia.gov/plant-industry-services.shtml or contact Debra Martin, Program Manager in the VDACS Office of Plant Industry Services at 804.786.3515.