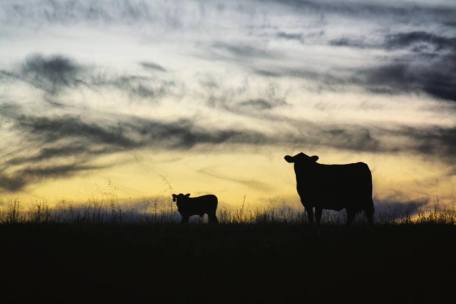 It was typical day at the Lynchburg Regional Animal Health Laboratory of the Virginia Department of Agriculture and Consumer Services. Veterinarian John Moody necropsied two calves from the same farm. The farm reported that three of four calves in a pen, all different ages, had died on the same day. Two of the calves were submitted to the laboratory for a necropsy, an animal autopsy, in hopes of determining the cause of death.

After the initial necropsy, the diagnosis seemed clear: the calves had died of pneumonia. Dr. Moody was not satisfied, however, and asked himself why three calves died and one survived. In addition, the three calves displayed some symptoms not always seen in straightforward pneumonia cases. To be thorough, he continued with a full workup and examination of all tissues.

When VDACS Veterinary Pathologist Dr. Lisa Crofton later examined the thin sections of brain as part of that workup, she identified the characteristic inclusions known as Negri bodies in the neurons, which only appear in cases of rabies virus infection.

Knowing that rabies is communicable to humans through saliva, and that the disease is 100 percent fatal but preventable through vaccination, Dr. Moody contacted the local office of the Virginia Department of Health. Health officials interviewed family members and others who might have come in contact with saliva from the calves and immediately provided shots to 15 people.

Later, the Centers for Disease Control confirmed rabies in the preserved brain tissue from the calves. In the meantime, the people involved already had received the rabies vaccination due to the quick intervention.

“Thankfully, Dr. Moody and others in Lynchburg didn’t stop when they had a diagnosis of pneumonia,” said Dr. Charles Broaddus, State Veterinarian. “They went that extra step, and as a result, 15 people are alive today who potentially could have contracted rabies, a 100 percent fatal disease.”