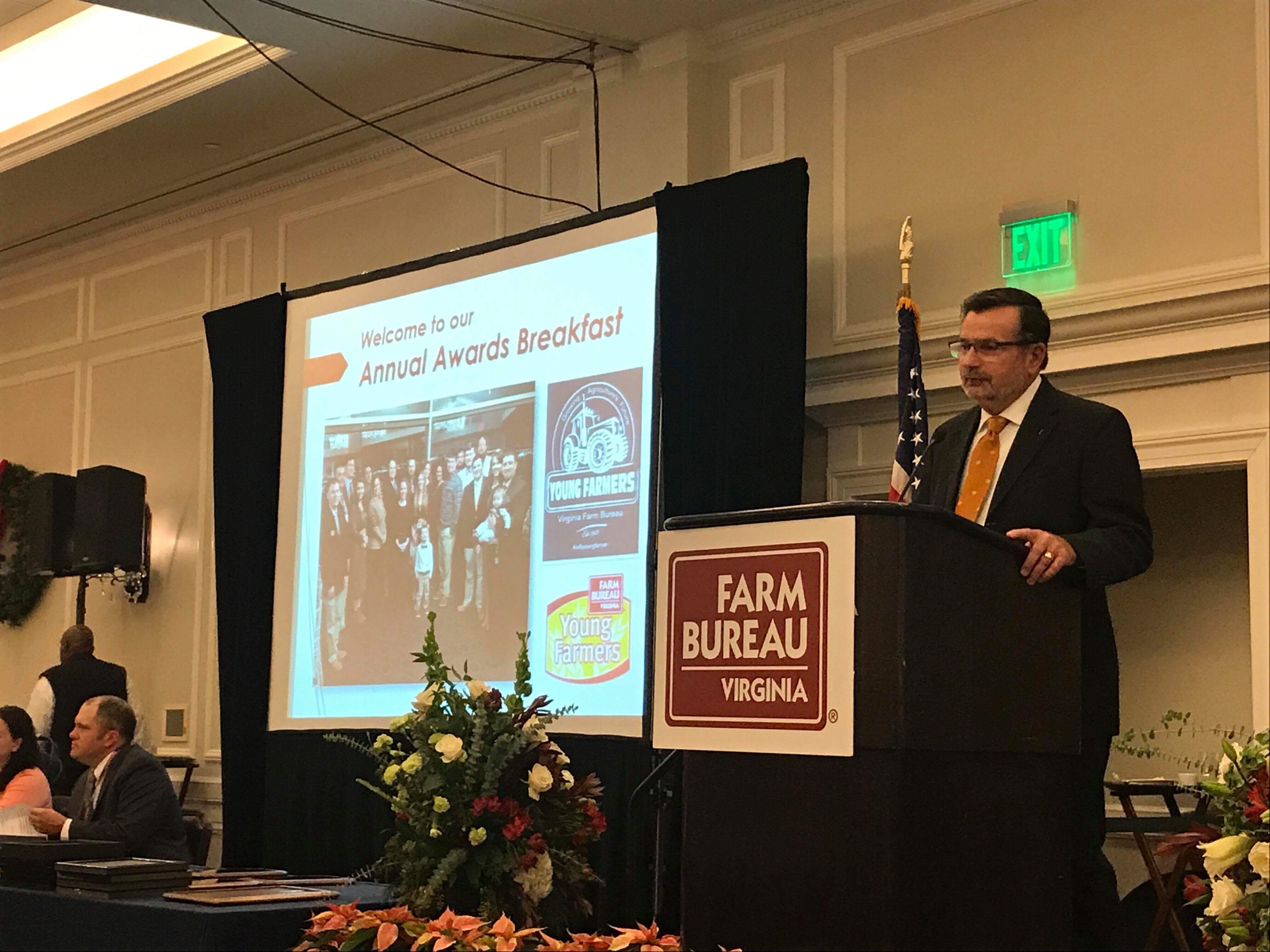 The Virginia Farm Bureau Federation finished 2017 in good shape, said Wayne F. Pryor, VFBF president. But even as the organization celebrated reaching a membership milestone and holding a successful state fair, Pryor warned that dark clouds are on the horizon for rural Virginians.

“At the end of September our state was facing a huge hole in the health insurance market. At one point 65 Virginia counties were looking at the strong possibility that no health insurance company would participate in the Affordable Care Act exchange,” he told voting delegates attending the 2017 VFBF Annual Convention in Williamsburg.

“That could have meant thousands of Farm Bureau members would have lost individual health insurance options next year. Whether you personally agree with the Affordable Care Act or not, many of your family members and neighbors have been using it for years. And it was about to be shut down for lack of subsidies for low-income participants.

“This is unacceptable,” Pryor said. “This will be the biggest pocketbook issue for famers across the state this fall and winter. Rural Virginia is being left out. And we in Farm Bureau need to press all our elected leaders for a solution.”

Pryor told Farm Bureau leaders from across the state the he had personally talked with both of Virginia’s U.S. senators; Rep. A. Donald McEachin, D-4th; and Gov. Terry McAuliffe during the potential crisis this past fall. “I told them I didn’t have a specific solution,” Pryor declared, “but that they need to fix this, and fix it now.”

Farm Bureau has a long history of helping rural Virginians find affordable health insurance options. Beginning in 1952 it offered both individual and small business group policies for Farm Bureau members. In 1992 it moved to become a broker for Anthem policies. In 2002 and 2013 it acquired two other health insurance brokerage companies licensed to work in Virginia, Maryland and the District of Columbia.

“If real and material reform doesn’t come in the next year, health insurance companies might be forced to, once again, restrict their coverage offerings to only Northern Virginia, Richmond and Hampton Roads,” Pryor warned. “Meanwhile, our rural hospitals and health care providers will struggle to keep their doors open. The whole health care system could start to break down, and rural Virginians will bear the brunt of that collapse.”

In recorded remarks, Pryor congratulated the organization’s grassroots leaders for reaching a membership milestone of 127,709 households. This is the first time in five years the Farm Bureau membership has expanded.

Ten straight days of dry weather combined with reconfiguring the layout of the State Fair of Virginia contributed to the one of the strongest attendance figures yet for the event, he added. Nearly 250,000 fairgoers visited the annual celebration of agriculture and rural lifestyles. Farm Bureau purchased a share of the State Fair in 2012 when it went into bankruptcy and became full owner in 2013. In addition to keeping the tradition of the fair alive, the purchase has afforded Farm Bureau a valuable tool to share agriculture’s story, Pryor said.

“More than $70,000 in scholarships will be distributed to participants in our youth competitions, and the Sale of Champions raised more than $82,000 in its third year. More than 9,000 students visited the fair as part of our Educational Expo.”

Governor-elect Ralph Northam promised to be a friend to Virginia farmers when he met with rural leaders last summer, Pryor said, and Farm Bureau is working closely with Northam’s transition team to ensure the new administration appoints leaders with agriculture’s best interests at heart.