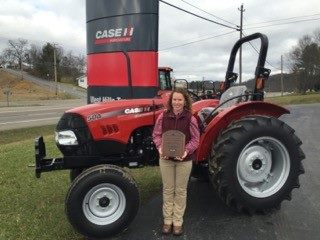 Today’s farmers and ranchers are accustomed to wearing a lot of hats, juggling a variety of roles to meet the demands of 21st-century agriculture. Mindy McCroskey of Bristol, Virginia, is a good example of this multi-tasking trend. To hear her tell it, she’s just doing what comes naturally.

“I’ve lived on a farm my whole life,” she says. “I can’t remember a time when I didn’t love cattle. I started showing at 4H when I was 9 and got my first registered Simmental when I was 11.

“Right now I have 19 cows and their calves, all registered Simmentals. They’re not as large framed as some of the breed. And while people may picture Simmentals as gold or white or red, I raise black cattle,” she says. “Black cattle are just sort of popular around here.”

McCroskey says Simmentals are good mothers, they produce a lot of milk and they gain weight fast with a lot of muscle. With a laugh, she adds, “And I think they’re a stylish animal.”

McCroskey’s parents and brother have their crossbreed cattle with her Simmentals on the family farm. “Really, my brother and I are following our father’s lead. He’s a teacher and a farmer, and we’ve been inspired to take that same path.”

“At Virginia Tech, we had one of the country’s first collegiate Farm Bureau Young Farmers and Ranchers chapters, and I’ve stayed active ever since,” she says. “Today I’m the chair of YF&R here in Washington County, and I represent this district on the state’s YF&R committee.”

Armed with a Bachelor of Science in agricultural education and Master of Science in career and technical education, both from Virginia Tech, McCroskey followed her family’s tradition. She started her career as an educator, teaching agriculture at Abingdon High School.

“I totally enjoy teaching,” she says. “It’s an opportunity to show my students that agriculture is more than just raising a crop or livestock, that there’s a whole range of skills that come into play.”

In January, McCroskey traveled to the American Farm Bureau Federation Annual Convention in Orlando, Florida, to compete for the YF&R Excellence in Agriculture Award. She took home finalist honors, which included a Case IH Farmall 50A tractor as well as a cash award.

“I spent the cash upgrading the tractor for the way we farm,” she explains. “Washington County is hilly, so I wanted four-wheel drive. And raising cattle, you need to move a lot of bales of hay, so I added a loader, too.”

You don’t have to win an AFBF YF&R award to benefit from the close relationship between Farm Bureau and sponsor Case IH. Virginia Farm Bureau members can save between $300 and $500 on Case IH Maxxum® and Farmall® tractors and Case IH hay equipment. McCroskey took advantage of this incentive when she upgraded her Farmall 50A tractor.

Visit fbverify.com/caseih to learn more and print your discount certificate today. Your certificate, along with valid ID, must be presented to the Case IH dealer in advance of delivery to receive the discount.

According to Mindy McCroskey, the true benefits of Farm Bureau membership go beyond financial advantages. “To me, the prizes are nice and the discounts are great, but the most important thing is how Farm Bureau brings people in agriculture together. You meet younger farmers and older ones, you exchange ideas and understand what other people are doing. It’s like an extended family, an entire support system for everybody with a common interest in the future of agriculture.

“There are plenty of leadership opportunities, a lot of chances to make your voice heard. If you’re interested in supporting agriculture, educating American consumers and learning more about the issues ag is facing, there’s no better place to start than [by having] a Farm Bureau membership.”