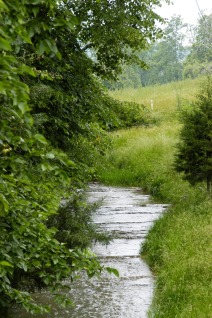 A record number of voluntary conservation practices adopted by Chesapeake Bay farmers since 2006 have significantly reduced the amount of nitrogen, sediment and phosphorus leaving cultivated croplands, according to a new report released today.
The report, part of USDA’s Natural Resources Conservation Service (NRCS) Conservation Effects Assessment Project (CEAP) estimates that since 2006, conservation practices applied by farmers and landowners are reducing nitrogen leaving fields by 48.6 million pounds each year, or 26 percent, and reducing phosphorus by 7.1 million pounds, or 46 percent.
The report notes that these practices have also lowered the estimated average edge-of-field losses of sediment, or eroded soil, by about 15.1 million tons a year, or 60 percent – enough soil to fill 150,000 railcars stretching more than 1,700 miles. The majority of the conservation practices in the Chesapeake Bay were made possible through Farm Bill conservation programs, which are now expired.
“This report demonstrates that voluntary conservation practices made possible through the Farm Bill can have a substantial impact on limiting nutrient and sediment runoff from farms in the Chesapeake Bay Watershed and across the nation ,” Agriculture Secretary Tom Vilsack said. “These conservation efforts help to clean our soil and water, boost outdoor recreation that adds more than $640 billion to our economy, and ensure that agriculture has the tools to remain productive in the years to come. The good work of Chesapeake Bay landowners has generated substantial progress in a short period of time, but more needs to be done – which is why it is critical that Congress act now to pass a Farm Bill that provides the full array of programs and incentives to build on these efforts.”
The Chesapeake Bay watershed touches six states and is home to 17 million people and almost 84,000 farms and ranches. Agriculture contributes about $10 billion annually to the region’s economy. Conservation practices have other environmental benefits, such as sequestering carbon and making farms more resilient to extreme weather events linked to climate change.
In order to better target conservation efforts in the region, USDA launched the Chesapeake Bay Watershed Initiative, or CBWI, in 2008. USDA targeted CBWI funding to priority watersheds and practices that would have the biggest impact on watershed health.
Due to these efforts, the report highlights a wider acceptance of innovative conservation practices. Notably, some form of erosion control has been adopted on 97 percent of cropland acres in the Chesapeake Bay Watershed. While this does not mean that all acres are fully treated to address sediment and nutrient losses, it is a positive indication of a willingness by farmers to do their part to help restore the Bay watershed. Additionally, the report shows an increased use of cover crops by Bay watershed farmers. Since 2006, land with cover crops in a cropping system increased from 12 percent of acres to 52 percent. Farmers are using a variety of other conservation practices, such as no-till, that help keep nutrients and sediment on fields and out of nearby waterways.
In October, the Chesapeake Bay Watershed Initiative expired due to the expiration of the 2008 Farm Bill, reducing the technical and financial assistance available to bay watershed producers.
The CEAP report is part of USDA’s effort to quantify the benefit of conservation efforts on private lands in major watersheds, including the Mississippi River and Great Lakes, as well as the Chesapeake Bay. The first CEAP report for the bay was released in 2011 and included data from farmer surveys conducted from 2003 to 2006. Today’s release is the first CEAP cropland report to revisit a particular region, and it includes data from an updated farmer survey in 2011.
CEAP reports combine farmer surveys, natural resource information and advanced modeling techniques to assess the effects of conservation practices on cultivated cropland, which account for 10 percent of the land in the Bay watershed. By comparing losses of sediment and nutrients from cultivated cropland to losses that would be expected if conservation practices weren’t used, CEAP reports give science-based insight into the approaches with the most benefits.
The full report, along with a fact sheet, summary and infographic, is available here. Learn more about USDA’s Conservation Effects Assessment Project.