The Virginia Department of Agriculture and Consumer Services (VDACS) has announced the state’s top twenty agricultural commodities and livestock for the 2012 production year. “This list shows the tremendous diversity of Virginia agriculture, which is just one of the reasons our products are in such demand in the global marketplace,” said Matthew J. Lohr, VDACS Commissioner. “Most of the power house commodities have retained their top rankings, but we also saw some switch-ups on the list.” 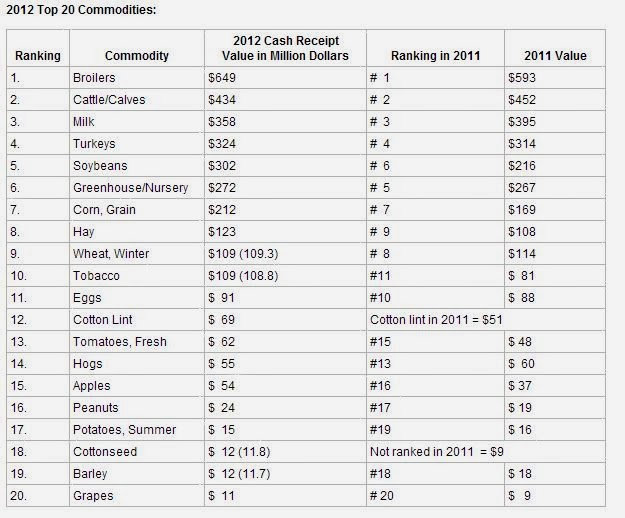 One of the biggest changes from 2011 was the movement of soybeans. In 2011, the value of the soybean was $216 million and they placed 7th in the rankings. The revised number moved soybeans to number 6 and corn down to number 7.  Cottonseed as a separate category entered at #18 with nearly $12 million in cash receipts. Cotton lint, ranking at #12, is a completely different product than cottonseed. They come off the same plant but are sold differently. The lint is what we traditionally think of as cotton; it’s white and puffy just as you’d expect. Within that boll of cotton are seeds about the size of a small pea. At the gin the cottonseed is extracted from the lint. The farmer gets paid for his lint fiber, then he or she either gets a check for his seed by weight or a credit for the seed by weight which is used against the ginning fees. Virginia sends some cotton to other states such as Pennsylvania to be used to feed dairy cows. Most of it is exported, however, to countries like Korea or Japan. Cottonseed was in high demand in 2012 due to higher grain prices, thus making it more valuable. Many farmers were able to export their 2012 production and command higher prices than selling it in the U.S.

Broilers, Virginia’s top commodity for several years, retained their first-place ranking and increased in value from $593 million in 2011 to $649 million in 2012. Cattle and calves lost about $20 million but still retained their #2 ranking.
They didn’t make the Top 20, but products immediately following show the growing importance of Virginia’s specialty crops. Peaches are #21 with $6 million in receipts; sweet corn ranks 22nd at $5 million, followed by watermelon at #23 ($3 million), cucumbers #24 with $2.3 million and range chickens at #25 with $2 million.
“Even a cursory look at Virginia’s top-ranking products gives an indication of just how diverse agriculture is here,” said Lohr. “We have never been a one-product state, and I believe a good bit of the strength of the industry lies in our diversity.”