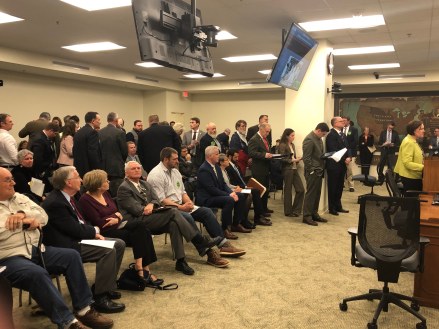 On Feb. 4 and 5 they made the case to state legislators for preserving that partnership rather than relying on regulatory mandates.

County Farm Bureau leaders from across the state staked out their seats at the Virginia General Assembly to voice concerns about SB 704 and HB 1422. Both bills would have mandated stream exclusion fencing and nutrient management plans by 2026.

“We found lawmakers willing to listen to our concerns, and we are appreciative,” said Wayne F. Pryor, president of Virginia Farm Bureau Federation.

That bill would establish it as policy of the commonwealth that Virginia will meet the nutrient reduction goals and create a stakeholder advisory group. The group will work toward solutions to address barriers that inhibit farmers’ implementation of nutrient management plans and stream exclusion for cattle, as well as a clearer matrix of what is needed for farmers to meet these goals. The substitute bill included a specific requirement to develop a portable fencing program for stream exclusion to help farmers who rent pastureland.

More than 30 farmers and agribusiness supporters spoke at the committee meeting.

On Feb. 5 the House Agriculture, Chesapeake and Natural Resources Committee reviewed HB 1422, and patron Del. Kenneth R. Plum, D-Reston, offered Hanger’s substitute version as replacement language for his bill. “This is how we can meet the Chesapeake Bay water quality goals and work collaboratively with farmers,” he said.

More than two dozen farmers spoke in favor of the amended bill, which passed 19-1.

Pryor called the committees’ actions “a heartening recognition that a partnership and teamwork will yield more results for improving water quality than a heavy-handed regulatory mandate.”

Fencing livestock out of a waterway—and installing an alternate watering system—can cost $20,000 to $300,000. Farm Bureau leaders emphasized to lawmakers that not every producer has the resources to get this done on his or her own. Additionally, cost-share recipients must expend dollars and install fencing before being reimbursed. A low-interest loan program has been one solution for farmers who are unable to pay up front to get the work started. That program, however, was maxed out in its first four months after requests from farmers.

One of Farm Bureau’s top priorities is seeking full funding for cost-share and technical assistance.