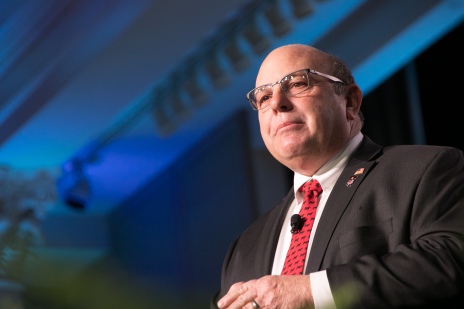 The recent escalation in the trade war between China and the U.S. will make things even more difficult for struggling farmers.

American Farm Bureau Federation President Zippy Duvall sent a letter to President Trump asking that trade negotiators make a deal as soon as possible to end recent tariffs. Duvall wrote that the tariffs “are slashing our exports, destroying a once-promising market for agriculture, worsening the farm economy and contributing to high levels of stress and uncertainty for many farm and ranch families.”

This is the third wave of tariff increases by China in retaliation against U.S. tariffs. The latest increase to 25% on $200 billion in U.S. imports from China went into effect May 10. China then raised tariffs on $60 billion of U.S. exports, including farm goods. Those tariffs will take effect June 1.

The U.S. exported almost $20 billion in agricultural products to China in 2017, making it the No. 2 export market for U.S. farmers. In 2018, U.S. agricultural exports to China declined $10 billion—about a 50% loss. “And it happened at a time when prices for some of our crops already were at their lowest level in decades,” Duvall noted.

China was the second largest market for Virginia agricultural exports in 2017, with the state’s exports to China valued at $1.72 billion.

“Trade uncertainty with China and other countries continues to depress commodity prices and the economic outlook for Virginia farmers,” noted Wilmer N. Stoneman III, vice president of agriculture, development and innovation for Virginia Farm Bureau Federation. “Spring planting has always been a time for a fresh start and optimism for farmers. This year that simply is not the case due to unsettled trade conditions.”

After the first round of tariffs on products to China, Trump announced a $12 billion Market Facilitation Program for farmers adversely affected. “While this helped some farmers, not all farmers benefitted from it, particularly our Virginia tobacco growers,” Stoneman said.

On Monday, Trump promised to buy an additional $15 billion of farm commodities and donate them to developing countries.

Duvall wrote in his letter that farmers appreciate the package; “however, time is running out for many in agriculture. I am hearing anecdotal reports of farmers, particularly those who are dealing with planting delays due to weather, deciding not to plant a crop this year because there’s just no market for it.”

He added that America’s overall trade deficit with China ballooned to $375 billion in 2017 and had continued to grow to $419 in 2018 despite the tariffs. “The deficit continues to grow because, with our overall economy doing well and with very low unemployment, people have more money to spend on imports.

“Such a large trade deficit with any one country is not sustainable for our economy.”

The solution, Stoneman said, is not more tariffs. “A fair trade deal approved by Congress is what is needed.”