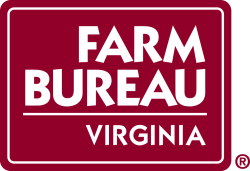 Farm Bureaus in Albemarle, Bland, Campbell, Prince William-Fairfax and Washington were recognized Nov. 27 by Virginia Farm Bureau Federation for their work in educating the public and promoting agriculture and Farm Bureau.

As a result of their cultivation and retention of members and their promotional and community activities, the five organizations received Best in State and New Horizon awards at the 2018 VFBF Annual Convention in Hot Springs.

Albemarle County Farm Bureau, led by President Richard Fox, won a Best in State Award for its work to discourage Albemarle County from implementing a stormwater utility with an impervious surface fee.

Washington County Farm Bureau, led by President Kevin Thayer, won a Best in State Award for the organization’s calendar, which featured agricultural photos from members and helped promote the county and Farm Bureau.