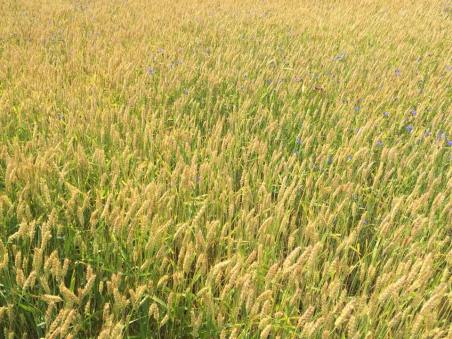 Participants in the Virginia portion of the 2018 Mid-Atlantic Wheat Tour were encouraged by what they saw on farms in the eastern part of the state.

The annual tour helps producers, buyers, end users and merchandisers assess the yield and quality potential for the crop. Thirty Virginia participants visited 19 farms in Culpeper County and on the Northern Neck and Middle Peninsula. Other portions of the tour featured farms in Pennsylvania, New Jersey, Delaware and Maryland.

But while the wheat looked good, Harper noted, “the next two weeks are important,” as growers prepare to harvest. “It really would have been bad if we’d had another week of cold, rainy weather” after Memorial Day weekend.

Winter wheat grown in the state typically is planted in October or November and harvested in late May through June. Wheat production gives Virginia growers a viable rotation crop and helps them keep their farms in production almost year-round.

The majority of wheat grown in Virginia is soft red winter wheat, which is milled into flour for cookies, cakes, crackers and some flatbreads.

Virginia farmers harvested 9.57 million bushels of winter wheat in 2017, with yields averaging 66 bushels per acre. In May, producers indicated they expect to harvest 11.7 million bushels, which would be a 23 percent increase.

The state’s top wheat-producing counties in 2017 were Northampton and Accomack on the Eastern Shore, followed by Caroline, Essex and Westmoreland.