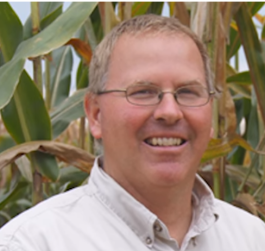 Since 2015, David Hula of Charles City County has held the world record for the highest corn yield in the National Corn Growers Association National Corn Yield Contest. He’s also the contestant every farmer wants to beat in season two of RFD-TV’s Corn Wars.

Farmers across the country have competed in the NCGA contest for more than 50 years, while the TV series that follows a selection of those contestants is just getting started. Season one of Corn Wars currently airs on Thursdays at 5 p.m. The new reality TV series gives viewers a look inside an evolving industry. Contestants compete to produce the highest corn yield per acre and address the challenges of 21st century farming.

The 2017 winning yield from Hula’s Renwood Farms earned him the top place in the no-till/strip-till irrigated category with more than 542 bushels per acre from his contest plot, setting a new world record, according to the NCGA.

“It’s humbling to know that we can have that success. You usually don’t think of Virginia as being a leader in corn production. You usually think of the Midwest. It’s a good story to share, because we farm the ground that was first cultivated in 1609 and it’s still productive,” Hula said.

His family farm, which spans more than 4,000 acres, is one of the few to include cropland on the Mainland Farms at Jamestown, the first land cultivated by American farmers in Virginia.

“The Hula family supports and represents Virginia agriculture well at the local and national levels,” noted Robert Harper, grain division manager for Virginia Farm Bureau Federation. “They are dedicated to the stewardship of the people, land, water and equipment that make up Renwood Farms. Dave strives to perfect both the science and art of production agriculture. Earning this yield award represents the culmination of combined efforts and much hard work.”

In 2003, Hula won his first NCGA National Corn Yield Contest with 322 bushels per acre. With each progressive year as a contestant he honed his technique.

“It’s a team effort. It’s nothing that I’ve achieved by myself. It’s neat to see that you put everything in place and the good Lord blesses you with a successful, bountiful harvest,” Hula reflected.

He’s an advocate of no-till farming, an important conservation practice that he says has been a critical part of his success. He uses Pioneer 1197 corn hybrid seed, along with innovative growing practices.

“In 2017, as a farm we struggled because it was a dry year. I like dry weather for irrigating corn, because when it’s dry we have a lot of sunshine and that’s something we can’t make. We can control moisture with irrigation,” Hula noted.

Since participating in the contest, he said, he values the relationships formed with other farmers across the country who all have unique challenges but similar goals. The contest results provide valuable data for future production.