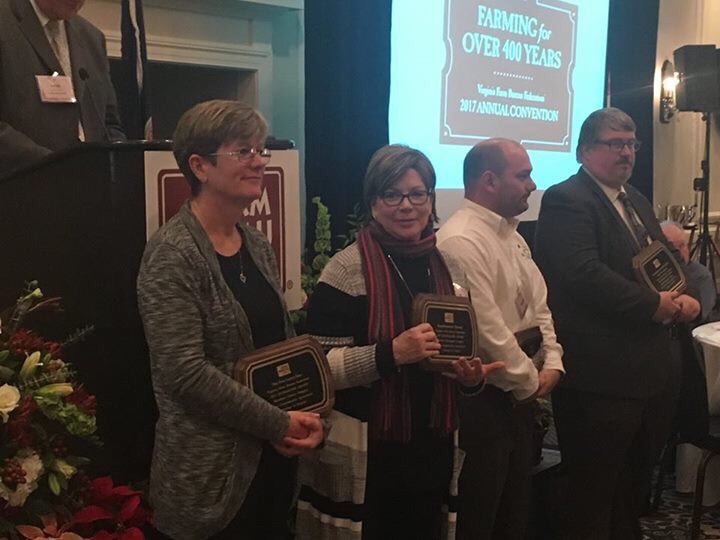 For the second consecutive year The Free Lance-Star in Fredericksburg has claimed Virginia Farm Bureau Federation’s top journalistic honor, the Ishee-Quann Award for Media Excellence, which recognizes the best of all entries in the organization’s annual Journalism Award competition.

The award is named in part for Jeff Ishee, the near-legendary host of Virginia Farming, which airs across Virginia and nationwide on RFD-TV. Ishee also operates On the Farm, a daily, Web-based farm news service.

The late Homer Quann was WSVA radio’s farm news director for several decades and was known as the most dedicated agricultural reporter in Virginia.

TheFree Lance-Star also captured the organization’s Members’ Choice Award for the third straight year. Winners in this category are selected using the same judging criteria as in other categories. Farm Bureau members nominate the candidates.

Meanwhile, for the seventh consecutive year, the news team at WHSV-TV in Harrisonburg claimed one of VFBF’s awards in the television category. They were joined by co-winner Neesey Payne of WDBJ-TV in Roanoke.

Co-winners in the daily newspaper category were Vic Bradshaw and Ellie Potter of the Daily News-Record, also in Harrisonburg; and Jay Pinsky, who contributes to The Northern Virginia Daily, based in Strasburg.

And for the second consecutive year, and a record 11th time in 30 years, the Rappahannock Record in Kilmarnock won the non-daily newspaper category.

Non-Daily category honorable mentions went to the Gazette-Virginian in South Boston and the Fauquier Times in Warrenton.

Honorable mention also was bestowed upon J.R. Ruppel of WSIG radio in Harrisonburg.

The award winners were announced Nov. 28 during the VFBF Annual Convention in Williamsburg.

“We continue to be awed by the depth of the stories and the professionalism of our media members,” noted VFBF President Wayne F. Pryor. “They have covered issues that Farm Bureau deals with virtually every day, and they’ve provided insight and clarity on the subjects.

“In this day and age, it’s reassuring to know that there are still reporters and editors who strive for accuracy and objectivity.”

The Free Lance-Star covered an array of topics, from Virginia’s Agriculture in the Classroom program—including the AITC Teacher of the Year—to various equine-related stories, some of which focused on Farm Bureau’s Meadow Event Park and the legacy of Thoroughbred racing legend Secretariat.

It profiled a local farm couple who transformed their large grain operation by using cover crops to attract beneficial insects and provide nitrogen to the soil. The newspaper also announced the re-opening of the Fredericksburg Livestock Auction, detailed the work associated with shearing sheep and marketing wool, and provided extensive State Fair of Virginia agricultural coverage.

“They use a good mix of sources, nice accompanying photos and strong writing,” the judges wrote. “They write so that the reader cares about the subject. And in telling agriculture’s story, this is important work.”

Bradshaw and Potter of the Daily News Record examined farms of the future, the raising of a grand champion animal for the county fair and why the fabric of family farms is so important. “They not only took time to describe how the livestock were raised but also explained how the program works,” the judges noted.

They explained the big value in raising miniature cows, the industry’s satisfaction with an EPA reversal on the “Waters of the U.S.” rule and the willingness of Rep. Bob Goodlatte, R-6th, to back research on industrial hemp.

“It’s obvious this paper understands the importance of agriculture in this farming-intensive area,” the judges added. “They get it. And that is a huge service to their readers.”

Pinsky explained the progress being made on non-point source pollution in the rural areas of Northern Virginia. He also explained the practice of farm scaping, which he described as “an ecological wonderland of hedgerows, insectary plants, cover crops and water reservoirs to attract . . . nature’s best insect assassins like birds, bats, spiders, reptiles and other pest predators to patrol their farms.”

He wrote about the importance of obscure subjects such as mulch and soil, explaining their environmental benefits in an entertaining, yet scientific, fashion.

“The writer offered readers lots to ponder about the resources and science behind agriculture,” the judges said.

The Rappahannock Record’s team of reporters wrote about the vital importance of honeybees for pollination, the value of a regional wheat quality tour, the USDA’s extension on water standards for produce growers, and opportunities for farmers in the growing craft beer movement. The newspaper provided extensive coverage to last year’s VFBF Annual Convention and the State Fair of Virginia.

“Not only do they cover local farming and farm families, they also show a dedication and resilience. The use their own talented staff to visit farms, and they pull from other state and national sources to provide a well-rounded, on-top-of the-issues newspaper edition each week,” the judges said. “Their readers stay informed of the state’s largest industry.”

WHSV-TV reported on 2017 planting intentions of farmers in the Shenandoah Valley, visited a farm where agriculture classes were being conducted and enlightened viewers about the growing number of consumers who’ve adopted the practice of eating seasonally.

WDBJ-TV’s Payne visited an array of Roanoke Valley farms and presented such topics as a day in the life of a local wheat-growing family, the annual outlook for strawberry season, and how to avoid dangerous heat exhaustion on the farm, as well as whimsical segments on raising sheep and goats.

“Her reports were educational but at the same time highly entertaining,” the judges said. “Viewers were able to live vicariously through her journeys—to a hydroponic lettuce operation, a goat farm, a produce farm, a strawberry patch and a wheat operation.”