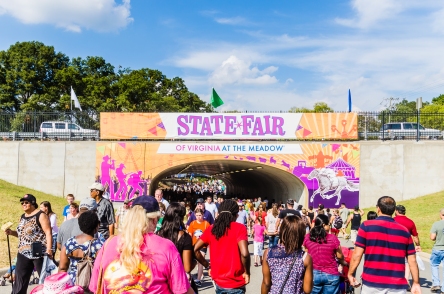 The State Fair of Virginia’s 2017 attendance was nearly 250,000, the second-highest since the fair moved to The Meadow Event Park in 2009.

“Our carnival and food gross sales were both records for the State Fair,” explained Marlene Pierson-Jolliffe, the fair’s vice president of operations. “Our new layouts were a success, and it was a very smooth operational fair.”

This year in Harvest Landing, the Kidway children’s amusement feature was moved to a spacious asphalt area in response to fairgoers who said the previous gravel area became muddy after rain and made maneuvering strollers a challenge. The larger Midway Madness was relocated to the Festival Loop area, which gave customers a much shorter walking distance and better access to rides, food concessions and other entertainment.

Other changes based on customer feedback included VIP parking, a farm-to-table event and a new special events tent which housed the giant pumpkin and watermelon weigh-in, the Miss State Fair of Virginia pageant and the first-ever Blue Ribbon Craft Beer Festival.

“We listen to feedback from our customers and try to be as responsive as we can,” noted Pierson-Jolliffe. She said the changes this year contributed to the fair’s success.

Also helping with the high attendance numbers was a lack of rain this year.

“We had 10 days of nearly perfect weather, and our positive changes to the property made it an even better environment for our fairgoers,” noted Greg Hicks, vice president of communications for the Virginia Farm Bureau Federation, which became full owner of the fair in 2013.

“We are already looking forward to the 2018 fair, which runs from Sept. 28 to Oct. 7,” Hicks said. “There will be even more positive changes as we continue to listen to our customers.”