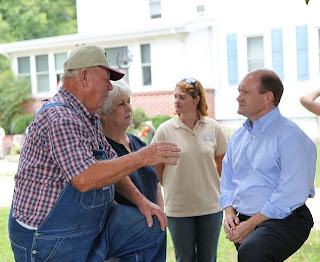 From the Field is a bi-monthly column written by Mark Campbell, Farm Bureau Field Services Director for the Central District. He writes about Farm Bureau member benefits and County Farm Bureau activities.

I recently attended the Virginia Farm Bureau (VFB) State Women’s Conference, and the theme was “Get Connected – Get Moving.” A big part of the conference was how to be effective in conversations about agriculture. Social media such as FaceBook, Twitter, and blogs are certainly tools of communication. But the same guidelines for being effective apply offline and in person.

Three things that resonated to me in the workshops were listening, telling your story, and being courteous. One of the workshops presented by Kathy Dixon of VFB was on getting the conversation started and utilized information from U.S. Farmers and Ranchers Alliance (USFRA) www.usfraonline.org and www.fooddialogues.com. The other presentation was by our keynote speaker, Katie Pinke from North Dakota. She is an agriculture advocate and can be found at http:/.com from which you can link to her on Facebook, Twitter, and Pinterest.

I would like to expand on the three principles that I mentioned earlier. Listening, while it may seem easy, may actually be a harder skill to perfect than we think, and I mean really listening and trying to understand what the other person is saying. How often are we thinking of what we are going to say next while the other person is talking to us? I know that I am sometimes guilty of that, especially when I hear someone spouting off talking points of differing opinions on agriculture, politics, or religion. Sometimes we need to read between the lines. Accusations against agriculture may just be a desire to really know how food is grown. One of the main missions of the USFRA is to increase transparency and have farmers and ranchers tell their story. If we don’t truly listen, we can’t effectively engage in the conversation. The speakers advised that we should have a conversation about agriculture and not a war of words.

The next principle was telling your story. The biggest take-away for me was a comment that Katie Pinke said. She said that people arguing a certain position can try to poke holes in facts or studies, but they can’t poke holes in your own story. If you are telling your own story-your own life experiences on your farm-it is impossible for anyone to discredit that. Everyone in the agriculture conversation is passionate on both sides. We in the agriculture community are science and fact-based, and we have a lot of science and facts to support our positions and practices. While this is important, we need to share more personal stories and not just regurgitate facts. Katie also said that video will increasingly be a communication tool to share personal agriculture stories. Another part of her presentation was to avoid always posting agriculture facts on your Facebook page or blog. Share some other interests you have. It will keep people more engaged and interested in what you have to say. You build relationships and credibility.

The final principle was courtesy. Let’s face it – there is a lot of noise in our society. We have TV, radio, internet, and more bombarding us with opinions all day long. One of the best ways to be effective in agriculture conversations or debates is to be courteous. People may throw dirt at you, but you don’t have to throw dirt back at them. A courteous conversation with facts and your personal story will go a lot farther than shooting back a snide remark. Plus, we have to face facts – there are some people that are not going to change their mind no matter what. Make your points and move on.

Lastly, I would like to say that the social media tools available have a lot of potential to get our message out to a huge nonagricultural audience. With the network of friends on Facebook, sharing some agriculture trivia or pictures of you on your farm or your livestock can reach people that you would have never been able to reach before, many that have never been near or set foot on a farm.

Remember, you don’t have to be armed with an arsenal of facts; just tell your story. If you need some facts, USFRA, Farm Bureau, and your national commodity organizations are good resources.

Until next time,
Mark

One thought on “From the Field: Conversations About Agriculture”