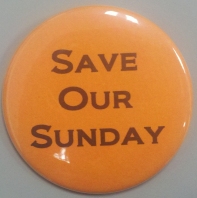 Just like Punxsutawney Phil this morning, Sunday hunting saw its shadow last night –all four House bills regarding Sunday hunting were tabled in subcommittee, including:

♦  HB921(Lingamfelter) that would allow hunting on Sunday on both public and private land.

♦ HB369 (Webert) that would allow Sunday hunting on private land with permission of the landowner.

♦ HB1002 (Ramadan) that would allow hunting on Sunday on private land in the counties of Fairfax, Fauquier, Loudoun and Prince William.

♦ HB989 (Morefield) which allows for hunting on Sunday between 2 p.m. and midnight.

In the packed subcommittee room, hunters, landowners, horse enthusiasts and people who want to enjoy a peaceful Sunday displayed their opposition to the bills by wearing buttons that said “No Sunday Hunting” and “Save Our Sunday.” Many also took to the podium to speak out again Sunday Hunting.

Again, thank you for responding to our action alerts and contacting your legislators on this issue! As you can see, your voices really made a difference!

Our work is not done, though. We’ve only won a battle so far, not the war. SB464 (Northam, Puckett, Petersen and Wagner) will be heard by House subcommittee during crossover. Also, people may try adding amendments allowing Sunday hunting to other bills. We are monitoring everything very closely to make sure we continue to uphold the policy that you all developed and voted for.

One thought on “Sunday hunting sees its shadow in House subcommittee”