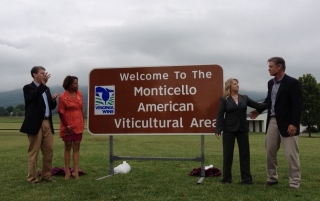 Governor Bob McDonnell has announced the unveiling of a new Virginia wine region sign program aimed at attracting more visitors to Virginia wineries. The signs will announce to travelers on selected primary and secondary roads that they have entered a particular Virginia American Viticultural Area (AVA) or wine region. The first phase of this program consists of seventeen signs in four Virginia AVAs and one well-known wine region.

Speaking about the new wine region signs, Governor McDonnell said, “In addition to having one of the fastest growing wine industries, the Commonwealth is blessed with some of the country’s most beautiful wineries and wine regions. The new signs will draw attention to the diverse wine regions and encourage travelers and tourists to see and taste what the Virginia wine industry has to offer.”

The first sign was unveiled earlier today in the Monticello AVA at King Family Vineyards in Crozet by First Lady Maureen McDonnell, Secretary of Agriculture and Forestry Todd Haymore, Interim Virginia Tourism Corporation Director Rita McClenny, and David King, co-owner of King Family Vineyards and a member of the Virginia Wine Board. As one of Virginia’s oldest AVA’s, Monticello is now home to 40 wineries. Throughout the spring and summer, signs will be placed at key points of entry in the Eastern Shore AVA, Northern Neck-George Washington Birthplace AVA, Shenandoah AVA and the Northern Virginia Wine Region.

“I want to thank Transportation Secretary Sean Connaughton, CTB, VDOT, and the Virginia Wine Board for their assistance in making these wine region signs a reality,” said Secretary Haymore. “Cross secretariat cooperation is key to the Governor’s overall economic development and jobs creation agenda. This partnership, along with our on-going work with the Virginia Tourism Corporation, will help spur more growth and opportunities at wineries and their suppliers in rural areas throughout Virginia.”

An AVA is a designated wine grape growing region in the United States distinguishable by certain geographic features. Boundaries of AVA’s are defined by the United States Treasury Department’s Alcohol and Tobacco Tax and Trade Bureau (TTB) generally at the request of winery and vineyard owners. Virginia currently has six AVAs and another proposed AVA is currently being reviewed by the TTB.

Raising the profile of Virginia wines and wine tourism are key components of the governor’s economic development and jobs creation initiatives. The governor has promoted Virginia wines at the Virginia Executive Mansion and throughout Virginia, on other domestic business recruitment visits, and on international trade and marketing missions to India, Israel, Canada, and countries in Europe and Asia. First Lady McDonnell has incorporated wine and wine tourism promotions into her First Lady Initiative Team Effort or FLITE.

Virginia is home to more than 200 wineries and is fifth in the nation for wine grape production. A newly released economic impact study shows that Virginia’s wine industry contributes almost three-quarters of a billion dollars – or $747 million – annually to Virginia’s economy. Virginia wineries and vineyards support 4,800 jobs that provide $156 million total in wages.

Wine travel in Virginia has gained many recent accolades, including being named one of the ten best wine travel destinations in the world for 2012 by Wine Enthusiast Magazine. Last year, approximately 1.6 million people visited Virginia wineries. Tourism is an instant revenue generator for Virginia. In 2010, tourism generated $19 billion in revenue, supported 204,000 jobs and provided $1.2 billion in state and local taxes.